Looking for fees and availability for Vishwanathan Anand?
Contact Us +91 9667832338 Email 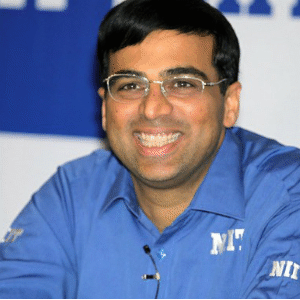 Vishwanathan Anand is a chess grandmaster and former World Chess Champion. Anand was the 15th undisputed World Champion, reigning from 2007-13. He was also FIDE World Champion from 2000-02.

As an Indian chess player, Anand blazed a trail with a number of firsts, including in 1984 becoming the youngest Indian to earn the title of IM, aged 14. At 16 he became the youngest ever Indian Champion. In 1987, he became the first Indian to win the World Junior Championship and India’s first Grandmaster and first World Champion.

In August 2010, Anand joined the board of directors of Olympic Gold Quest, a foundation for promoting and supporting India’s elite sportspersons and potential young talent. In 2010, Anand donated his World Championship gold medal from his successful 2008 title defense to the charitable organisation, ‘The Foundation’ to be auctioned off for the benefit of under privileged children.

Vishwanathan Anand has received many national and international awards including the Padma Shri in 1987, The Padma Bhushan in 2000 and the Padma Vibhushan in 2007. The fourth, third and second highest civilian honours bestowed by the Government of India. His book, ‘My Best Games of Chess’, won the Book of the Year Award in 1988.

Want to book Vishwanathan Anand as a keynote speaker for your next event?