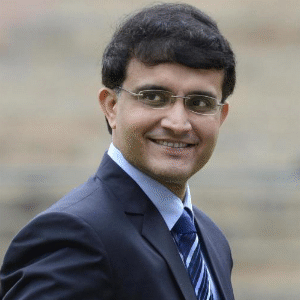 Former Indian Cricketer, Sourav Ganguly, is regarded as one of India’s most successful captains of modern times. Ganguly will be best remembered for his elegant cricketing style and vast contribution to cricket in India in a career spanning 15 years. He is currently the President of the Cricket Association of Bengal and President of the Editorial Board with Wisden India. During his playing career, Ganguly established himself as one of the world’s leading batsmen, particularly in the one-day format.

Sourav Ganguly is regarded as one of India’s most successful captains in modern times and one of the greatest One Day International (ODI) batsmen of all time, winning 21 out of 49 test matches. He is currently the eighth highest run scorer in ODIs and was the third batsman in history to cross the 10,000 run landmark, after Sachin Tendulkar and Inzamam UI Haq. In 2002, the Wisden Cricketers Almanack ranked him the sixth greatest ODI batsman of all time, next to Viv Richards, Sachin Tendulkar, Brian Lara, Dean Jones and Michael Bevan.

Ganguly’s big break came while playing for India on their tour of England. He scored 131 runs and cemented his place in the Indian team. In the 1999 Cricket World Cup, he was involved in a partnership of 318 runds with Rahul Dravid, which remains the highest overall partnership score in the World Cup tournament history.

In 2000, Ganguly was made captain of the Indian Cricket Team following the resignation of Sachin Tendulkar. He went on to lead India to the 2003 World Cup final, where they were defeated by Australia.

Sourav Ganguly was awarded the Padma Shri in 2004, one of India’s highest civilian awards.

Having been dropped by the national team in 2004, he returned in 2006 and made successful batting displays.

In 2008, Ganguly joined the Kolkata Knight Riders team as captain for the Indian Premier League Twenty20 tournament in 2008. That same year, after a home Test Series against Australia, he announced his retirement from international cricket.

The Indian team was ranked eighth in the ICC rankings before he became captain and under his tenure the team rank went up to second. An aggressive captain, Ganguly is credited with having nurtured the careers of many young players under him.

Want to book Sourav Ganguly as a keynote speaker for your next event?